In her article “Performative Materiality and Theoretical Approaches to Interface,” Johanna Drucker writes: “The critical design of interpretive interface means that we understand the task not just as an arrangement of things or a structure for the organization of behaviors and actions, but as a mobilization of a critical network that exposes, calls to attention, its made-ness – and by extenstion, the constructed-ness of knowledge, its interpretative dimensions.”  In some ways, Ryan Griffis’ website for his project Riparian City functions as this type of critical interface, exposing the constructed nature of not only itself, but also the typical ways in which we categorize and create the natural world and its resources.

Drucker emphasizes a focus on the performative qualities of interface design and interrogation because, she states, “knowledge creates the object of its discourses, it does not ‘discover’ them.”  While this type of criticism of knowledge is certainly not new (Foucault, Mitchell, etc.) interpretations of the creation of knowledge from such a critical standpoint are often lacking when it comes to discourses about the natural world, natural history, and the hard sciences in general.  These are also spaces of knowledge that mix with discourses from the digital humanities infrequently.  Facts from nature are often only read as data sets, directly linked with truth claims.

By using a website as a part of his physical performance, Ryan shifts and puts into question our understanding of the materiality of the Doan Watershed.  He begins by directly questioning the accepted history of the area with statements such as: “The rattlesnakes, wolves, chestnut trees, salamanders and other 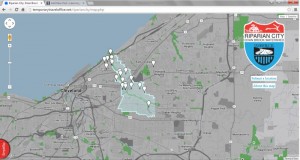 once thriving human and non-human inhabitants surely knew it by other names long before Nathaniel Doan arrived here in the late 18th century.”  This idea of fluid boundaries and naming is pushed even further, however, with the mapping project that defines the digital existence of the Doan Watershed.

While the Doan Watershed no doubt exists in the material world, its representation digitally, as both a community map, falsified history, and fictitious political entity asks us to begin to think about physical space in much more abstract ways while also addressing the pure materiality of the water and land and the way that those objects (and places) interact with the animals and humans that encounter them.

The Riparian City interactive map is, in this respects, a critical, performative interface, demonstrating the ways in which “material forms [the map itself, the land, the water, etc.] are only the site of potential for meaning production, not for transfer.” (Drucker) The map, as it is built up by users who define the space and place of the Doan Watershed in limitless ways, are not creating a set of definitive facts, rather they are compiling a set of experiences, memories, or interpretations. In this way, the map, by revealing itself as part of a fanciful city and travel office, creates itself as a real object that allows user to begin to interrogate how we define fact, reality, and history.