Our charge for the first assignment was to explore an extra-textual resource.  I want to take up a category of suggested extra-textual type that hasn’t been addressed so much in the examples brought forward by the class thus far,  namely rubrics and standards.  This category was sort of assigned to me, and although I had (and still have) no intention of pursuing the creation of one for the class, I now appreciate how adept the association was.  In reading a number of the articles assigned for this week, my thoughts kept returning to my project on OAIS (an ISO standard) and I was drawn to Julia Flander’s mentions of FRBR.

For those of you outside the LIS fields, FRBR (pronounced fur-burr) is a conceptual model that treats bibliographic entities through sets of relationships.  Below is a foundational diagram, see Wikipedia for a quick description (http://en.wikipedia.org/wiki/Functional_Requirements_for_Bibliographic_Records): 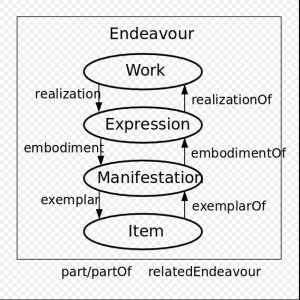 What I want is a materiality analysis of this model— someone to treat this object by enquiring of it in the ways that Drucker suggests in the latter portion of her article.  What are the forensic materialities of this?  How can we utilize this modeling in a more opaque fashion?  In this instance, I am applying my own usage of the term ‘opacity’ to Drucker’s description of more humanistic forms of interface design, and not simply as a binary to her mention of the term transparency:

“In such an approach, the formal, graphical materiality of the interface might register the performative dimensions as well as support them. Such approaches would be fundamentally distinct from those in the HCI community. In place of transparency and clarity, they would foreground ambiguity and uncertainty, unresolvable multiplicities in place of singularities and certainties. Sustained interpretative engagement, not efficient completion of tasks, would be the desired outcome. Grounded in principles of interpretation and a theory of subjectivity, such an approach to design has yet to be developed. But it would expose the process of thinking rather than display fixed results of intellectual activity as if they were products.”

Can FRBR be construed as a platform in Bogost and Montfort’s sense? Can we operationalize media archaeology as a method for investigating this standard or rubric as an information object (or event) (Drucker, Parikka)?  I use the term ‘media archaeology’ here with some trepidation because I confess that I don’t understand it very well, but I also think that it comes closer to the type of investigatory method that Drucker seeks in her article than they ways in which she characterizes it there.  In this case, I refer specifically to Jonathan Stern’s article “MP3 as Cultural Artifact”, which Ernst cites as a most adept example of what he wants media archaeology to look like when performed (Ernst, Digital Memory and the Archive, 2012).  Understanding the underpinnings of a standard like FRBR is crucial; as Jussi Parikka says in the introduction to Ernst’s book, we live not so much in an information society but an information management society.  FRBR, like OAIS and the other standards, are part of the privileged invisible labour that creates systems which we use without thinking much about them.  To echo Drucker’s summary of post-structural critiques, these models are often decentered.  When using a bibliographic database like Scopus or JSTOR or Google Scholar, we don’t think about the undergirding models like FRBR, let alone the materiality of them, even though we often question the underlying algorithms.  This particular breed of performance, standards, is hidden, but its very decentered centrality should act as impetus for further investigation.  Sadly it hasn’t happened yet— when trying to find a good article even beginning this work into the subject of FRBR for my students last semester, I came up empty handed.  I know it probably seems like a cop out not to make more concrete ties between FRBR and the kind of work Drucker wants to see right here, but I think it would be doing a disservice to both projects to attempt that in such a short space and time.

Understanding the materiality of this type of labour is also essential, as Flanders describes, in seeking to ‘demystify knowledge work.’  If one of the concerns has been with the value of alternative, extra-textual products of intellectual labour, like the MediaCommons projects I reviewed last week, then perhaps understanding the performative materiality of this labour is part of what is needed in understanding how to accredit it.  In LIS work, the invisibility of this type of labour, like the work that Julia often does, cuts both ways in that it is simultaneously privileged and in danger of being overlooked.  Working in invisible domains allows a relative measure of impunity while working: apply or employ models as you choose, since this work is not visible to users in a direct sense.  On the other hand, since the encoding that is done is not often seen by the users, it can be taken for granted.  When thinking about funding arrangements for these types of endeavors, the latter type of invisibility can be quite costly.  Julia’s example about her text encoding work is doubly interesting to me— I have often wanted to look more closely at the implications of an object like FRBR and what it means for catalogers or books merchants to map discrete physical and digital objects onto FRBR entities, but she is also talking more broadly about the shift in labour types when we move from text-based forms of scholarship to treating editorial work as a process of information modeling.  This kind of move fits within what I see this class as exploring, as this latter type of work is the type of project we seek to do here.

A final note: this point about funding is particularly germane when you consider it in light of the concerns raised in Elizabeth Losh’s article.  She speaks to requirements by grant-funding institutions like the NEH (one also mentioned by name by Julia) for recipients to maintain ‘neutrality’ in their deliverables and grant outcomes.  Without trivializing the long history of scholarship surrounding that word, Losh’s mention of neutrality brought to mind the same conference presentation I mentioned in last week’s post, this time a slide by Sarah Roberts: 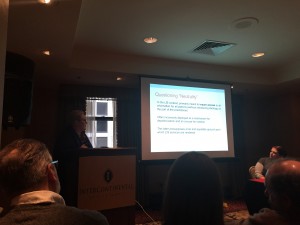 This word signifies particular things in LIS, and we have a tendency to misappropriate it as an excuse of depoliticization without understanding what this might represent more powerfully in an information management society.  The idea that work needs to be ‘neutral’ in order to be funded calls to my mind more of what Sarah describes, but in the era of Dominguez and Salaita, I fear large funding bodies take a different approach.  Yet here I wanted to point this out, because I wanted to stake a claim for the idea of ‘neutrality’ does not need to connote something negative, nor should it in theory proscribe funding for projects like Dominguez’.