Johanna Drucker in her article “Performative Materiality and theoretical Approaches to Interface” addresses the gap created in the study of systems and technologies from their materiality, specifically she focus on how digital technology has been described as immaterial medium. She also looks at what is lost in terms of critical theory when a digital device is understood as disembodied, as fungible. Druker’s article specifically address three issues: 1) “The desire to shift discussions of materiality towards a performative model” 2) “a recuperation into digital humanities of mainstream principles of critical theory on which this model is based” 3) and she also offers “some thoughts on how we might move toward integrating this model and critical principles into a model of humanistic interface design”

In Drucker’s article the author argues that materiality is an essential operation and identity of digital media and that materiality “is has to be understood in terms of what it does, how it works within machinic, systemic, and cultural domains”. This description moves beyond “forensic materiality” which focuses on the study of the evidence of a technology, such as physical traces (e.g. ink, fingerprints) or the “formal elements” of it, such as the organization of the layout, and also it moves forward from a perspective of “distributed materiality”, which puts emphasis in the different layers of interdependence of a system which restrict the understanding of a technology and its singularities.

For Drucker, performative materiality “shifts the emphasis from acknowledgement of an attention to material conditions and structures toward analysis of the production of a text, program, or other interpretative even”. To understand materiality as a performative act pushes us to think of what is produced through the technology in relation to the use of it. It assumes that there is a creative process that is singular in relation to the user/counterparty and its interpretation is based on singular contexts. Therefore, the materiality of a digital technology produces one of a kind result that might be in the range of electrical responses to the production of emotions. This also pushes us to think that the interpretive process is based on “inter-relations, dependencies, contingencies, and circumstances” which brings back the historical context of technologies and its politics as central to the understanding of its performance. By looking at the materiality we are force to look at its politics, while the analysis of a disembodied technology allows it to be innocuous and politically disconnected.

In the case of the “Transborder immigrant tool project” (TBITP) that we discussed last week, there were some interesting points made regarding its agenda and the effects of it, questions like if this was a project that was meant to be an artistic performance or an intervention in the field-through the immigration path in the border between the U.S. and Mexico, place on the table issues of materiality that Drucker address in her article.

The first time I learned about the TBITP it was in San Diego at the Museum of Contemporary Art in San Diego, there in the middle of a room there was a Motorola i455 and a small description of what it did. After that encounter I started to do some research about the artifact that lead me to understand the phone as a political tool of resistance, humanitarian action and until certain point bizarre sense of humor in the context of immigration in the US. The materiality of the project in my case was performed by means of my knowledge and personal context that helped me to understand immigration issues in a very different context than an immigration officer or a migrant who uses Mexico as its entry point. The design of the software or the look of the application was something I didn’t have access to, but still was something that I considered, though at that point the political load of the artifact made me forget about part of its design. As well as, I don’t think that I ever thought of this tool as a piece of performative art, but I always focused on the artifact and its technological development. Having Drucker’s perspective in mind, I think it helps me to look at the artifact in a broader context, but at the same time to reflect of the personal performance between the artifact and my own personal context, and how meaning, relevance, artistic value gets added or lost in the translation process (interaction with the technology). 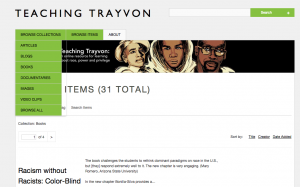