Beyond Big Data: the politics of vision in complex systems

In February 2014 Professors Hamilton and Weissman will host a panel at the College Art Association conference in Chicago: 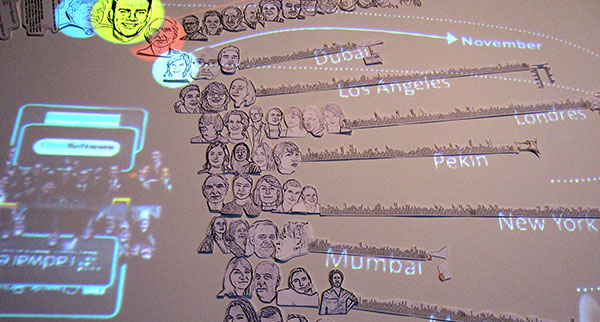 “Big Data” no longer belongs exclusively to the domain of supercomputing. The proliferation of digital artifacts has made the amassing of large collections available to any curious browser or hoarder. Increasingly, artists and artist collectives, curators, and scholars use a research paradigm that locates itself at the intersection of big data, digital tools and technologies, and traditional humanistic scholarship and artistic practice. Working alone or in teams, scholars, artists, and curators have begun to create new online or offline spaces, data structures, maps, charts, or even hardware or software as part of their research agendas. But how do scholars and artists make visible the values and epistemologies embedded in the complex technological systems they use—and often, simultaneously, seek to critique? The question of vision is central to this inquiry, not only because images play a key role in these systems, but also because technological systems facilitate visibility through the application of frames, filters and algorithmic ordering. This session thus launches from the intersection of science and technology studies and visual studies in order to investigate the politics of vision in technological systems, as well as the innovative methodologies at work in their analysis.

This paper traces the cybernetic influence on designers, urban planners, architects, and human scientists, to produce a preliminary speculative genealogy of contemporary “smart” and ubiquitous computing territories. Central to this history is a genealogy of how data, bandwidth, and life became integrally linked through new tactics of design, measurement, and visualization. Taking a series of case studies ranging from the independent group—Archigram—to Nicholas Negroponte’s experiments in Soft Architecture, to contemporary smart city developments such as Songdo in South Korea, the paper will trace the rise of this ideal of an algorithmically produced territory, and the subsequent transformations (real and imagined) in the forms of measurement and calculation administering populations. Ideals of feedback, data management, modularity, and visualization underpinned an emerging post-World War II attitude to the city as an experimental “test-bed”, a self-reflexive, and self-monitoring organism which was infinitely enhanceable, improvable, and mobile. These real and imagined machine-cities were viewed as experiments with no truths to uncover, self-produced reality worlds which by far overcame any discourse of simulation that still relied on the real. Counter, then, to contemporary arguments about simulation and risk, this paper will argue that the cybernetically imagined city was about uncertainty and capacity, and possessed a myriad of forms, some of which envisioned radically different practices of managing and living in an uncertain world. This is particularly true throughout the 1960’s and 1970’s as worries about nuclear security faded in front of concerns about racial tension, transformations in political economy, and environmentalism. Bridging the utopian, the possible, and the built, this paper inquires into these contested imaginaries and futures of urban life and infrastructure that came from cybernetic traditions and continue to inform our ideals of smart, sentient, and calculative spaces.

Through the work of American photographer Lee Friedlander, this paper will consider the relationship between photography, computing, and the visualization of networked technologies in the moment just before photography’s digital turn. The paper will examine two commissions Friedlander received in the mid-1980s—one from the Massachusetts Institute of Technology, and the other from the supercomputer manufacturer Cray Research—as proleptic instances in which photography anticipates computing’s future. In their serial production and organization, these photographs not only document the evolution of computing technology but also function as sets of visual data, collected to produce an image of an information society in which systems increasing take on what I argue to be a photographic and screen-based logic. More broadly, the paper will consider the kinds of temporal acceleration induced by the supercomputing technology depicted and the related image proliferation witnessed in recent years.

In the late 1960s and early 1970s Haacke made a number of artworks comprising visitor polls, using them to visualise some of the social factors affecting participation in the art world. Haacke sought to computerise later versions of these polls – with varying levels of success – the better to afford more complex data collection and visualisation.

Forty years later Haacke’s institutional critique by data analysis has been internalised by the contemporary art museum which is currently refunctioning itself by soliciting and responding to user feedback digitally, presenting diverse cultural offers tailored to different demographics across multiple physical and virtual sites.

Might such developments lend support to Chantal Mouffe’s contention that the contemporary art museum could be recast as an agonistic space? Or are we witnessing a pseudo-democratisation of the museum effected by its adoption of responsive marketing techniques? This paper considers the programming consequences of visualising museum audiences via digital profiling.